Article # 45 What is Metabolism and Why is it Important? 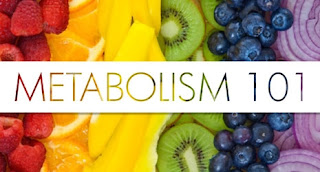 What is Metabolism and Why is it Important?
What is Metabolism?
Metabolism is the amount of energy (calories) your body burns to maintain itself. Whether you are eating, drinking, sleeping, cleaning etc... your body is constantly burning calories to keep you going.

Metabolism is affected by your body composition. By body composition, I mean the amount of muscle you have versus the amount of fat. Muscle uses more calories to maintain itself than fat. People who are more muscular (and have a lower percentage of body fat) are said to have a higher metabolism than others that are less muscular. For example, let's say you have two people who are the exact same height and weight. One exercises on a regular basis with weights, in addition to aerobic exercise, and has a low percentage of body fat. The other never exercises and has a higher percentage of body fat. The first person who exercises will have a higher metabolism than the second person. What this basically means is that person #1's body will use more calories to sustain itself than person #2.

How can I Increase My Metabolism?
Begin to exercise and stop dieting. If you've never exercised before, make sure you see a doctor before beginning a new exercise program (your problems with metabolism may be the result of a medical condition rather than your diet or lack of exercise).
You can increase your muscle mass by doing some type of resistance work (i.e. lifting weights, using exertubes, rubberbands, dynabands, hand weights etc...). You can also decrease your level of body fat by doing some type of aerobic exercise at least 3 days a week for longer than 20 minutes. By aerobic exercise, I mean an activity (such as walking, jogging, step aerobics, hi/low aerobics, biking, swimming etc...) that will increase your heartrate into the target zone and keep it there for the duration of the exercise session. You also need to eat! - Do not diet, just watch the types of foods you eat. Try to eat a diet that is lower in fat (check the labels on the foods that you buy).
I Never Gained Weight Until I Reached 30, What Happened?

After the age of 30, your body gradually begins to lose it's muscle. If your activity level stays the same and the amount of calories you eat stay the same, you will gain weight because your metabolism has slowed down (you don't have as much muscle as you did in your 20's). If you exercise with weights and do some type of aerobic activity on a regular basis, you probably won't notice much of a change in your metabolism as you age.
How do I Know if I Have Slow Metabolism?

Symptoms of slow metabolism include fatigue, feeling cold, dry skin, constipation, a slow pulse and low blood pressure. These symptoms could be the result of a medical condition rather than low metabolism - MAKE SURE YOU SEE YOUR DOCTOR to rule out any type of medical problem.
Is there any way to Lower Metabolism?

If you eat a very low-calorie diet, your metabolism will slow down in order for your body to survive (your body thinks it is starving).

From dieting, my weight has gone up/down over the years, How has this affected my Metabolism?

If your diet has resulted in a loss of muscle and an increase in your percentage of body fat, then your metabolism has probably slowed down.

Does Genetics Play a Role in Metabolism?
Yes it does. Everyone has a different bone structure and body type (mesomorph, ectomorph, endomorph or combination). It is not realistic to think that everyone can look like the Baywatch beauties or like Arnold Schwartzenagger. However, given your body type and genetic make-up, you can exercise (with weights and aerobically) to look the best that you can.
How Long is My Metabolism Increased After Exercise?


This is a tough question and one that I am frequently asked. Most experts agree that weight training and aerobic exercise do increase metabolism while you are exercising and after you are done. They disagree on how long after exercise your metabolism remains increased.
When you are exercising aerobically, your focus should be on burning calories and working your cardiovascular system. Because it takes more calories to exercise, your metabolism is sped up during the activity.

When you are lifting weights or doing other resistance work, focus on the activity itself which not only burns calories but increases muscle strength, tone and endurance.

The combination of aerobic activity and weight training will result in a body that has more muscle and less fat - so the end result will be a higher metabolism.
Posted by Unknown at 4:45 AM

Email ThisBlogThis!Share to TwitterShare to FacebookShare to Pinterest
Labels: Information about Health Issues