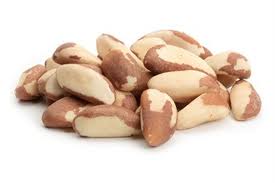 Brazil nuts are large seeds that grow in the tropical rain forests of South American countries such as Bolivia, Brazil, Columbia, Peru, Venezuela and the Guianas. Even though they are called 'Brazil nuts', their largest producer and exporter is Bolivia and not Brazil.

Brazil nuts are said to be like macadamia nuts. They grow on a tree that is botanically called Bertholletia excelsa. They can be used in cooking instead of coconuts or macadamia nuts, due to their similarity. There are many health benefits of dried fruits, such as walnuts, almonds, raisins, and cashews. There is no doubt that these nuts are high in calories, but they also contain good amounts of minerals, anti-oxidants and vitamins. Similarly, there are many health benefits of Brazil nuts because of their high selenium, magnesium and thiamine content. The flavonoids present in these nuts combat against development of cancer. Selenium present in Brazil nuts prevents cellular damage caused by free radicals in the body.

Nutritional information about Brazil nuts is mentioned below.

Are Brazil Nuts Bad for You?

It is a well-known fact that dried fruits could be fattening if eaten too much. Therefore, there are certain factors that need to be considered before consuming Brazil nuts in large quantities, as researches have proved, there are certain pitfalls of these nuts.
People allergic to nuts should refrain from consuming them. The relatively high percentage of polyunsaturated fats in these nuts (34 percent) causes the shelled ones to turn rancid fast. So, it is best to store them in the refrigerator. Nuts roasted in oil and salted nuts are high in calories and should be avoided. To gain maximum benefits of consuming Brazil nuts, it is good to consume them unsalted. Shelled Brazil nuts in their basic natural form are safer and healthier. You can also use chopped nuts in cookies, cakes and other desserts.

It is a very good habit to consume all food items in moderation and same goes with Brazil nuts. Well, there are a number of health benefits of eating Brazil nuts, but remember to have just a few of them on a day as over consumption can lead to toxicity and obesity. It is recommended to have a few Brazil nuts twice or thrice per week and not deprive yourself of this wonderful nut.