Article # 158. Who gets autoimmune diseases? 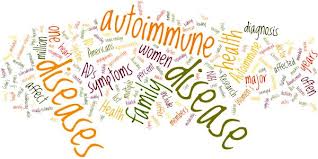 What Causes Autoimmune Diseases?
·         The causes of autoimmune diseases remain unknown. Much more research is needed to fully understand them. However, evidence is pointing to infectious agents, such as viruses and bacteria. They may be important triggers in people who have a certain genetic makeup. Smoking or drugs also may trigger these chronic diseases.
·         “The initiating cause can occur up to four years before any clinical symptoms appear,” Peyman says.
·         “Everyone should be aware that they can reduce their risk of developing these diseases,” Peyman says. “As with cardiovascular disease and many cancers, inflammation is a major factor in the dysfunction of the immune system with autoimmune diseases. A diet rich in antioxidants and smoking cessation are good places to begin in reducing inflammation, he says.
Posted by Unknown at 7:08 PM