Article # 143. What are the foods I should avoid during pregnancy? 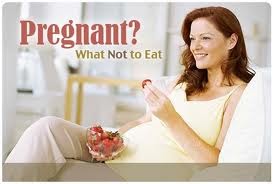 What are the foods I should avoid during pregnancy?

Raw Meat: Uncooked seafood and rare or undercooked beef or poultry should be avoided because of the risk of contamination with coliform bacteria, toxoplasmosis, and salmonella.
Deli Meat: Deli meats have been known to be contaminated with listeria, which can cause miscarriage. Listeria has the ability to cross the placenta and may infect the baby leading to infection or blood poisoning, which may be life-threatening. If you are pregnant and you are considering eating deli meats, make certain that you reheat the meat until it is steaming .
Fish with Mercury: Fish that contain high levels of mercury should be avoided. Mercury consumed during pregnancy has been linked to developmental delays and brain damage. A sample of these types of fish include: shark, swordfish, king mackerel, and tilefish. Canned, chunk light tuna generally has a lower amount of mercury than other tuna, but still should only be eaten in moderation. Certain types of fish used in sushi should also be avoided due to high levels of mercury. Please see Mercury in Fish for specific types of fish and further information on how to calculate mercury levels.
Smoked Seafood -Refrigerated, smoked seafood often labeled as lox, nova style, kippered, or jerky should be avoided because it could be contaminated with Listeria. (These are safe to eat when they are in an ingredient in a meal that has been cooked, like a casserole.) This type of fish is often found in the deli section of your grocery store. Canned or shelf-safe smoked seafood is usually OK to eat. 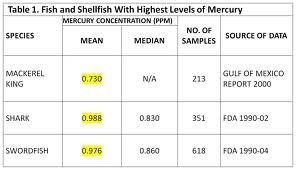 Fish Exposed to Industrial Pollutants: Avoid fish from contaminated lakes and rivers that may be exposed to high levels of polychlorinated biphenyls. This is primarily for those who fish in local lakes and streams. These fish include: bluefish, striped bass, salmon, pike, trout, and walleye. Contact the local health department or Environmental Protection Agency to determine which fish are safe to eat in your area. Remember, this is regarding fish caught in local waters and not fish from your local grocery store. 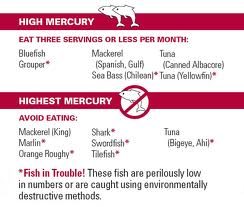 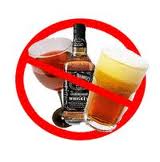 Alcohol: There is NO amount of alcohol that is known to be safe during pregnancy, and therefore alcohol should be avoided during pregnancy. Prenatal exposure to alcohol can interfere with the healthy development of the baby. Depending on the amount, timing, and pattern of use, alcohol consumption during pregnancy can lead to Fetal Alcohol Syndrome or other developmental disorders. If you consumed alcohol before you knew you were pregnant, stop drinking now. You should continue to avoid alcohol during breastfeeding. Exposure of alcohol to an infant poses harmful risks, and alcohol does reach the baby during breastfeeding.
Unwashed Vegetables: Yes, vegetables are safe to eat, so you still need to eat them. However, it is essential to make sure they are washed to avoid potential exposure to toxoplasmosis. Toxoplasmosis may contaminate the soil where the vegetables were grown.