Protein is a vital component of a healthy diet, because every single cell in your body contains proteins. Protein is a major component of muscles, skin and organs, and proteins play crucial roles in all of the biochemical reactions necessary for life. When a person does not eat enough protein, a form of malnutrition called Kwashiorkor develops. Dietary protein deficiency is rare in developed countries, but in developing countries, famine or scarce access to food can result in widespread cases of Kwashiorkor. Several symptoms commonly result from Kwashiorkor. 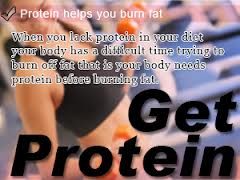 A deficiency in dietary protein intake can cause several highly visible symptoms. The color of the skin may change, because the body needs protein in order to make melatonin, the pigment that gives skin its color. Skin may become lighter, especially in spots. Skin irritation can also develop, including a rash or dermatitis. The texture and color of hair may change, and hair loss may occur. Swelling, or edema, can develop in several body parts, particularly the stomach, which can swell up very large and protrude from the body.


Without sufficient protein, the body cannot create muscle. Low protein intake often leads to large decreases in muscle mass, leading to unintended weight loss. Muscle weakness frequently occurs also, as well as fatigue, lethargy and apathy, an unwillingness to engage in physical activity. Children with a protein deficiency often fail to gain weight or grow properly. Even if children later have access to enough protein, they may never reach their full growth potential in life if they were exposed to long-term protein deficiency during childhood.


Proteins play a key role in regulating the immune response to infection. Without adequate intake of protein, the immune system is often weakened. People with a weakened immune system will develop infections more often than normal, and the infections can be more severe than they otherwise would be.

Several other symptoms can result from not eating enough protein. Long-term dietary protein deficiency can cause a person to go into shock, which may lead to a coma. Diarrhea is also a frequent symptom of not enough protein. Increased irritability and anxiety may also occur. The liver can also become enlarged, and levels of enzymes produced by the liver may be altered.

Email ThisBlogThis!Share to TwitterShare to FacebookShare to Pinterest
Labels: Benefits of Healthy Food, Health Benefits of Food, Nutrition and Diet