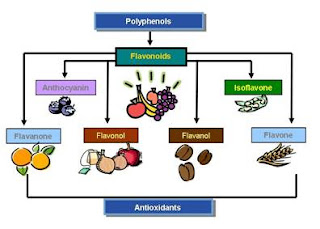 POLYPHENOLS
Polyphenols are a group of chemicals found in many fruits, vegetables, and other plants, such as berries, walnuts, olives, tea leaves and grapes. They are classified as antioxidants, meaning that they remove free radicals from the body. Free radicals are chemicals that have the potential to cause damage to cells and tissues in the body.
Polyphenols have been found to possess a variety of potential health benefits, including cancer prevention and reducing the risk of getting heart disease. Some studies have also found that polyphenols lower LDL cholesterol, or “bad” cholesterol, in the body. 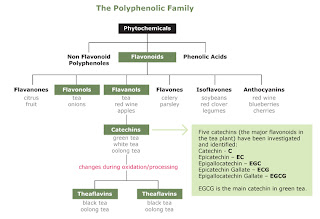 Polyphenols all have similar ring-shaped chemical structures, and they can be categorized into four different groups based on the number of rings and the molecules that are attached to those rings. The groups are called phenolic acids, flavonoids, stilbenes and lignans.
Phenolic acids include hydroxybenzoic acids, such as gallic acid found in tea, and hydroxycinnamic acids found in coffee, blueberries, kiwis, plums, apples and cherries.
Flavonoids work as both antioxidants and anti-inflammatory agents. There are several different types of flavonoids: flavones, flavonols, flavanones, isoflavones, anthocyanidins, chalcones, and catechins. They're found in a wide variety of plant-based foods, including fruits, vegetables, legumes, red wine, and green tea. 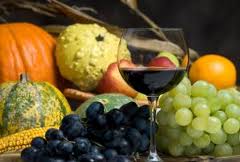 Stilbenes include resveratrol, which is found in small quantities in red wine and peanuts.
Lignans are found in legumes, cereals, grains, fruits, algae, and some vegetables.
Eating a balanced diet with fruits, vegetables, whole grains and legumes should provide you with a wide variety of polyphenols. Some polyphenols, such as epigallocatechin gallate (EGCG) and resveratrol, are available as dietary supplements. Always speak to your health care provider before taking large doses of dietary supplements.
Green Tea contains high concentrations of polyphenols (antioxidants), which are a class of phytochemicals associated with heart disease and cancer prevention. 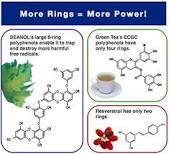 Flavonoids are a specific class of polyphenols present in fruits, vegetables, tea, grape juice and red wine. Over 4,000 different flavonoids have been identified. Flavonoids possess strong antioxidant properties and may protect cells and tissue against free radicals. Flavonoids may also offer non-antioxidant properties (such as regulating complex cell processes) associated with a variety of health benefits. During the meeting of the American Dietetic Association in May 2005, tea was identified as the most significant source of flavonoids in the US diet.
CATECHINS (EGCG)

Catechins are the primary flavonoids produced by the Camellia sinensis plant. Because green and white tealeaves undergo minimal processing, they retain the leaf’s naturally high level of catechins. EGCG (Epigallocatechin Gallate) is the main catechin in green tea and appears to be the most powerful—with antioxidant activity about 25-100 times more potent than vitamins C and E. Catechins are believed to fight aging and cancer and are responsible for the slightly astringent, bitter flavor often associated with green tea.
THEAFLAVINS AND THEARUBIGINS

Theanine is a rare amino acid (found almost exclusively in high quality tea--especially white and green teas) that produces a calming, mood-enhancing effect in the brain, acting as a natural anti-depressant and stress reliever. Theanine is highly concentrated in the young tealeaves early in the growing season, and is converted into catechins as the leaf matures. Therefore, tea that comes from early harvests and teas that are shade-grown contain the highest levels of theanine because the extra production of catechin is restricted. (Early-harvest and shade-grown teas also contain a high percentage of catechins because the leaves are young and nutrient-dense). Theanine provides an elegant, gentle, sweet taste to the tealeaves.

Email ThisBlogThis!Share to TwitterShare to FacebookShare to Pinterest
Labels: Health and Fitness